Trying to ‚feel‘ the Hidden World of the Emotion through elementary and old means such as the sound and the words. This is what The Infant T(h)ree meant to do since their origin: entering from the very beginning in direct contact with the Emotional Kernel and trying to move it into a world which is normally away and absent.
To achieve this (target) it has been necessary to draw on the well of the silent sound of Gigi Masins poetry, Massimo Berizzi’s nocturnal echoes and Mirco Salvadori’s visionary lyrics.
Three spirits on whose shoulders lay a multiannual experience in different musical fields relying on a single common feature: prolong the ‚waiting instant‘ that allows reality to give way to vision.
The Infant T(h)ree privilege the ‚play‘. They are well in the adult age but still prefer to linger on the art of imagination: thanks to the magic means of a bracket, they allow a simple number to turn into a solid rooted tree, whose branches shelter a kind of ‚buen retiro‘ dedicated to the subtle and sweet perception of the Emotion.
m.s. – The Infant T(h)ree

Recorded and Mixed by The Infant T(h)ree
January 2010 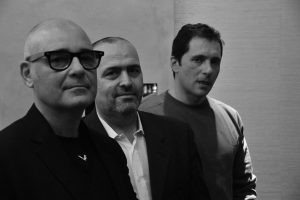